Reckless was a small Mongolian mare purchased in 1952 in Korea by Lieutenant Erick Pederson, leader of the Recoilless Rifle Platoon in 5th Marine Regiment.  In Marine jargon recoilless rifles were known as “reckless rifles,” hence her name.

Marines trained Reckless to carry 75mm ammunition and supplies to frontline firing positions. She learned quickly and often completed her mission without a handler.  A strong, mutual bond formed.  It was no longer just a horse and Marines; the platoon accepted her as one of their own.  The small mare became Private Reckless.

In March 1953, the 5th Marines were engaged in a particularly violent struggle known as the Battle for Outpost Vegas.  During one day of that engagement, Reckless made 51 trips from the ammunition supply point to the frontline positions, most of them on her own.  She carried over 300 rounds, more than 9,000 lbs, across 35 miles of rice paddies and steep mountain trails to her fellow Marines.  After offloading her supplies, she carried the wounded back to the aid station.  Reckless was wounded twice, but never faltered.  If there had been a strong bond between two and four legged Marines before, it was cemented forever by her heroic actions that day.  In recognition of her bravery, she was promoted meritoriously to corporal.

When the 5th Marines returned to Camp Pendleton in 1954, Reckless came with them.  She lived the remainder of her days at the Camp Pendleton stables.  Over the years, she had three foals: Dauntless, Fearless, and Chesty.

In 1957, General Randolph McCall Pate, Commandant of the Marine Corps, awarded her a final promotion to Staff Sergeant (E-6).  Although she was never again asked to risk her life under fire, she played a central role in regimental ceremonies.  After her death, Reckless was buried at the Camp Pendleton stables with full military honors.

The cost of the proposed Reckless monument project will cost $185,000 to prepare, ship, and install a bronze monument to Reckless aboard Marine Corps Base Camp Pendleton.  When in place, it will look very much like one installed at the National Museum of the Marine Corps at Quantico, VA in July 2013.

CPHS is assisting with the fundraising and will match the money raised, up to $30,000, with funds already in our accounts.  We hope that you will join our cause. 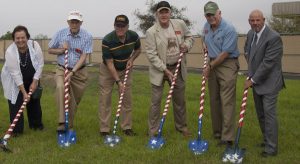 On Monday, Aug. 29, 2016, a groundbreaking ceremony was held in front of the Pacific Views Event Center at the planned monument site.  The ceremony included participation by CPHS Board Members, author Robin Hutton, those who served with and cared for Reckless, and the Base Commanding General, Brig. Gen Kevin Killea.

For coverage of the groundbreaking ceremony and story of SSgt Reckless, check out the articles by the San Diego Union-Tribune and the Orange County Register at the following links:

Staff Sgt. Reckless wasn’t just a horse, she was a Marine who served in Korean War (OC Register)

The official dedication ceremony took place on Wednesday, Oct. 26, 2016 with a crowd of well over 500 people attending the event.  Here’s a few photos from the event: 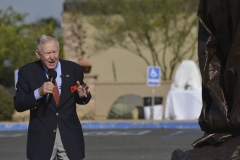 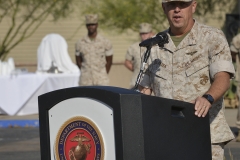 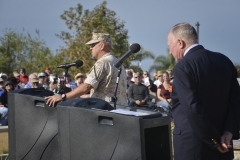 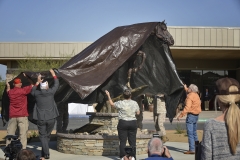 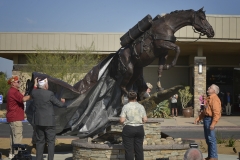 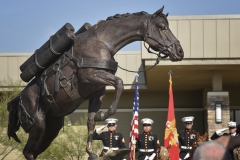 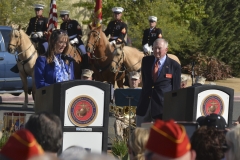 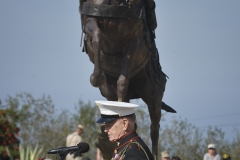 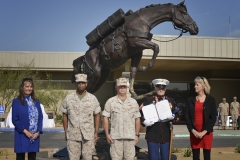 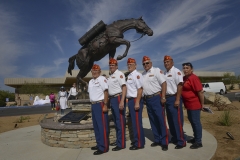 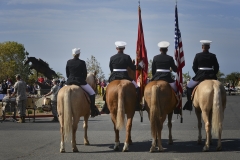 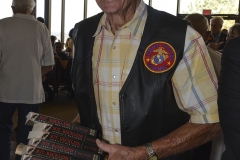 There was media coverage of the SSgt Reckless Monument Dedication ceremony by local media:

Donate by making a check out to the “Camp Pendleton Historical Society” and mailing it to:

You can also donate using PayPal by clicking the “Donate” button below: