In 1882, the property was leased to the family of Jane Magee (known as the “Bean Queen”), who raised lima beans on the surrounding coastal plane.  When the Marine Corps purchased the land in 1942, Jane was concerned about losing her home but President Roosevelt promised her that the family could live on the site for as long as the then-current generation survived.  Jane’s descendants lived in the Adobe until 1967, at which time the house became vacant.

As with any vacant structure, time began to take its toll and the Adobe suffered significant deterioration.  The Marine Corps, recognizing the deterioration of this historic structure, began an extensive restoration of the Las Flores Adobe in 2001, in conjunction with the National Park Service and the School of Engineering at the University of Vermont.

In 2008, the Camp Pendleton Historical Society (CPHS) adopted this restoration effort as a major fund raising project, and was pleased to gift a total of $28,000 to the Marine Corps for use in the Las Flores Adobe restoration in 2010 and 2011.  The monetary gift included a $3,000 grant from San Diego County’s Community Enhancement Program and a $600 grant from the Camp Pendleton Officers’ Wives’ Club; both grants secured by applications from CPHS.

Furthermore, with an additional $3,000 grant from the same San Diego County program, CPHS contracted with a local company for the fabrication and installation of mounting frames for historic information panels now on display at the Las Flores Adobe National Historic Landmark site. 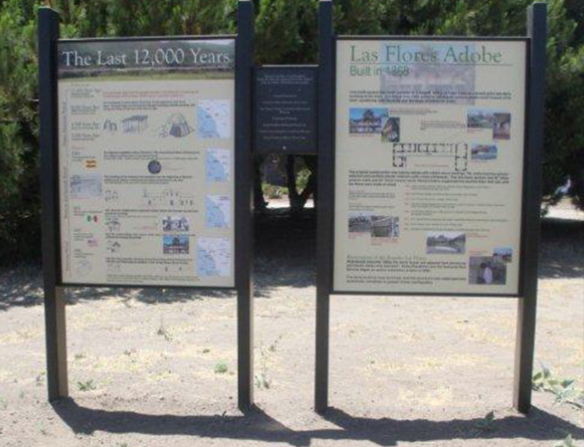