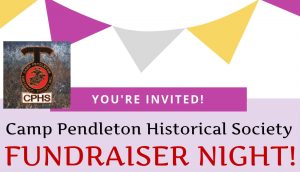 Support CPHS by dining at Señor Grubby’s (377 Carlsbad Village Dr, Carlsbad) on Wednesday, January 29 from 6-8 pm. A portion of the proceeds from sales during those hours is being donated to CPHS.

Meet CPHS Board members and get acquainted with the work CPHS does in preserving and promoting Camp Pendleton history all while having an awesome meal at Señor Grubby’s!

Exhibit – “75 Years – Women in the Marine Corps on Camp Pendleton 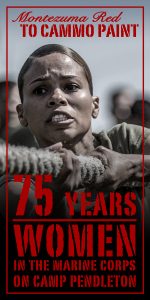 The exhibit includes artifacts and memorabilia showing the history of Camp Pendleton women Marines.  From those early women who performed drill marches in high heels to the recent development of an integrated School of Infantry, the exhibit relates stories of these determined Marines.

To arrange a tour of the exhibit, please contact the museum at (760) 725-5758 or via email mcbcampen_history@usmc.mil.

Become a member of the CPHS – use PayPal to join

The Camp Pendleton Historical Society (CPHS) is dedicated to preserving and promoting the rich and colorful history of the land that is now Camp Pendleton.  Our interests span the entire history of the region, to include prehistoric times, native American culture, the Spanish mission era, the rancho story, and finally, the United States Marine Corps ownership since 1942.